10 Movies to Watch With Your Family This Holiday Season 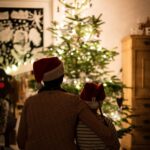 It’s that time of year again. Time to break out the old classics to watch in front of a warm fire, curled up on the sofa, surrounded by loved ones. Here are ten holiday classics you and your family should watch this holiday season:

It’s hard to believe this movie is almost 20 years old! The classic tale of Buddy the Elf realizing he’s actually a human after being raised as an elf in the North Pole. Heading to New York to find his real family, Buddy is in for the adventure of a lifetime.

There have been a few versions of this classic tale over the years, but the 1964 take is by far the best. This short animated film following the journey of a well-known and well-loved holiday character is the perfect addition to your holiday season.

It’s hard to imagine forgetting your kid at home while you head off for a Christmas vacation overseas, but that is exactly what happens to Kevin in this fun holiday film. Being left behind was fun for the 8 year old for a little while, but then he must defend his house against two burglars on Christmas Eve.

This is a story about a very memorable Christmas. From getting tongues stuck to frozen poles, leg lamps and BB guns, there is never a dull moment in this Christmas classic.

How the Grinch Stole Christmas

There have been countless versions of this story told through film over the years, from the classic 1966 animated TV movie to Jim Carrey’s 2000 adaptation or even the newest remake, Dr. Seuss’ The Grinch from 2018. No matter which version you prefer, this story is perfect for the holidays!

Another holiday classic that comes in many forms! Whether you prefer to read the story to your kiddos or watch one of the film adaptations, Scrooge and the ghosts of Christmas Past, Present and Future could be just what you and your family are missing this holiday season.

This 1946 classic will warm your hearts and may even leave you holding back a few tears. Following George Bailey as he struggles with life and purpose, this movie will help you realize the true meaning of Christmas, and maybe even life.

Sometimes miracles happen, dreams come true and Santa really is real. Christmas is a magical time, and maybe anything can really happen. This is the story of a little girl named Susan who no longer believes in Santa, until she meets a Santa from a department store who may actually be more than just a man in a fuzzy red suit.

After an accident causes Santa to fall, Scott Calvin puts on the red suit and is whisked away to the North Pole. Calvin doesn’t believe that he is the new Santa Claus until he begins to gain weight and  his hair starts to turn white. He comes to terms with his new job, but can’t let his family know his new identity!

The Nightmare Before Christmas

Jack Skellington may look like a Halloween character but he fits right in with the Christmas crowd. After accidentally discovering what Christmas is, the Pumpkin King is determined to have a Christmas of his own. He brings all the Christmas cheer back home to Halloween Town, but ends up bringing more chaos than expected.