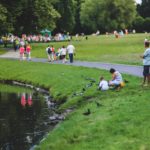 As summer draws to a close, so does this year’s Sun Sets Concert Series, held annually at Calabasas Lake. The final performance of this year’s series, held on Sunday, August 26 at 6 pm, will feature Steely Jam, a Los Angeles–based Steely Dan tribute band founded by drummer David Robin. The group is dedicated to capturing the original sound and feel of the Steely Dan touring band in classic numbers, such as “Rikki Don’t Lose That Number” and “Do It Again.”

This free concert wraps up the series of four events that open up the normally private Calabasas Lake to the public. Previous performers in this year’s series included Jumping Jack Flash, a Rolling Stones tribute band; Cold Duck, an eight-piece dance band; and Sinatra Big Band. Past years have featured Broadway classics and Beatles tributes among other family-friendly offerings.

The popular annual concert series is co-sponsored by the Calabasas Park Homeowners Association. All concerts are held on the Calabasas Lake Greenbelt. Parking can be found at the Calabasas Tennis & Swim Center (23400 Park Sorrento) adjacent to the Greenbelt, or at the Calabasas Civic Center (100 Civic Center Way), where a free shuttle will be available from 4:30 to 8 p.m. Field seating is available on the grass—attendees are advised to bring lawn chairs and blankets. Limited fixed seating is available on a first-come, first-served basis. For additional information on available amenities and site restrictions, please check the city’s website.

With the opportunity to picnic and sing along to first-class entertainment, Calabasas residents have long made the Sun Sets Concert Series a traditional part of their summer fun. The August 26th Steely Jam concert promises a rocking finish to another successful year of community enjoyment.