Kelsea Ballerini, Chris Stapleton + More to Perform at ACM Party for a Cause 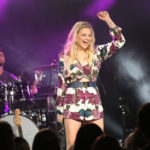 The Academy of Country Music has announced the dates and artists for the 2017 ACM Party for a Cause.

The annual ACM Party for a Cause brings together some of country music’s hottest artists to raise money for ACM Lifting Lives, the organization’s charitable arm. This year’s event will take place at a new host hotel, Hard Rock Hotel & Casino, and will span March 30-April 2 leading up to the 52nd Annual ACM Awards in Las Vegas.

Dubbed “The Week Vegas Goes Country,” the multi-night party will include performances from Kelsea Ballerini, Chris Stapleton, Billy Currington, Lady Antebellum, Jake Owen, LoCash and more across a variety of venues. The full schedule is available on the event site, with more performers to be added as the date gets closer.

“Some of our fans clearly like the more intimate environments compared to the big festivals, so this year we will give them that version celebrating more artists up close and in their faces. From songwriter rounds to fun party nights out, with this schedule there will be plenty for fans to dive into all day every day,” Co-Chairman of the ACM Events Committee George Couri says in a press release.

The ACM Awards will air live from the T-Mobile Arena at 8PM ET on April 2, marking the first ceremony from the new venue. No nominations have been announced yet, but if history holds true, they should be revealed next week.

Last year, seasoned host Luke Bryan teamed up with Dierks Bentley to host the festivities, but no news has been announced on whether or not the duo will return in 2017.